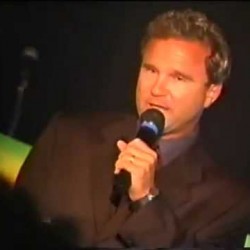 “The only two things I ever wanted to do,” Harris recalls, “were to be an actor and a baseball player.” Those parallel worlds have converged on several occasions. Harris grew up on the Chicago stage. At age 10, he joined the Screen Actors Guild (SAG) and took his first acting job at the Goodman Theater playing Mamillius in A Winter’s Tale. He is also an alum of Chicago’s famed Second City. In 1979, he met a Chicago casting director in search of new local talent who insisted he read for a TV pilot the next day. The script was sent out by messenger as Harris was playing baseball. After his screen test, Harris ventured to Hollywood, met with casting directors, retained an agent, and, within a year, landed his dream part on Happy Days.

From 1980-84, Harris appeared on 21 of the hit show’s episodes. He also scored roles in other episodic series including “Simon & Simon,” “Lou Grant,” and Disney TV. After Happy Days went off the air, Harris returned to baseball. After trying out for the 1984 US Olympic Baseball team, he started his own local entertainment company, which eventually became Harris Kal Productions. His notable work in film includes Nothing In Common (1986) with Tom Hanks & Jackie Gleason, and The Babe (1992) starring John Goodman. “I’ve always pursued my passions in life,” Harris declares, “I work hard and have fun.”

Neighborhood: All of Chicagoland